In 2013, the NGC Bocas Lit Fest inaugurated a new annual lifetime achievement award to recognise service to Caribbean literature by editors, publishers, critics, broadcasters, and others. The Bocas Henry Swanzy Award for Distinguished Service to Caribbean Letters is named for the late BBC radio producer (1915–2004) who created a landmark platform for Caribbean writing in the 1940s and 50s through the Caribbean Voices programme, which broadcast fiction and poems by West Indian writers across the region. 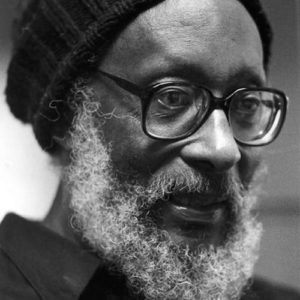 Barbadian writer, scholar, and editor Kamau Brathwaite, who passed away on February 4th at the age of 89, was a towering figure in Caribbean letters and culture for half a century. Dozens of contemporary Caribbean writers — of both poetry and prose — acknowledge him as an influence and a mentor.

Just days before he died, Brathwaite agreed to accept the 2020 Bocas Henry Swanzy Award for Distinguished Service to Caribbean Letters, presented annually by Trinidad and Tobago’s Bocas Lit Fest. The award pays tribute to Brathwaite’s landmark work as a critic — the author of many seminal essays on Caribbean literature and culture — literary activist, and editor, and was also intended to honour him in the year of what would have been his ninetieth birthday.

Born on 11 May, 1930, Brathwaite studied at Harrison College in Barbados before winning a scholarship to read history at Cambridge University. After working in Ghana and St. Lucia, he joined the history department at UWI Mona in 1963. Four years later, he published his groundbreaking book of poems Rights of Passage (1967), which became the first volume in the trilogy later collected as The Arrivants: a formally inventive and intellectually provocative exploration of Caribbean history and culture and its ancestral roots in Africa, ranging from poetic litanies to extended passages of “nation language,” from the comic to the tragic, influenced by folk music and jazz — “making / with their // rhythms some- / thing torn // and new,” as the trilogy’s closing lines proclaim.

A prolific poet over the decades, Brathwaite developed in the 1990s what he called his “Sycorax video style” — “a use of computer fontage to visualise his sense of dream & morph & riddim drama,” as he described it. A rebellion against the convention of orderly verses and stanzas marching down the page, this aesthetic followed Brathwaite’s conviction that “the hurricane does not roar in pentameters.”

Parallel to his career as a poet, Brathwaite also published a broad-ranging corpus of essays on topics in Caribbean history, cultural studies, and literary criticism. In the 1960s, he was one of the founders of the Caribbean Artists Movement, which brought together dozens of Caribbean and Black British writers, artists, critics, musicians, and others. In 1970, he cofounded the groundbreaking intellectual journal Savacou, which fuelled intense debates about the nature and purpose of Caribbean literature.

The Bocas Henry Swanzy Award will be presented to a representative of the Brathwaite family at the annual Kamau Brathwaite Lecture on Thursday 5 March, 2020, hosted by the Cultural Studies Programme at the University of the West Indies Cave Hill campus. Brathwaite and his legacy will also be celebrated at the tenth NGC Bocas Lit Fest, running from 1 to 3 May in Port of Spain.

The 2019 Bocas Henry Swanzy Award was presented to publishing pioneer Ian Randle of Jamaica, founder and chairman of Ian Randle Publishers Limited, which he founded in 1990 as the Caribbean’s first commercial scholarly publishing company.

The 2018 Bocas Henry Swanzy Award was presented to Anne Walmsley, writer, editor, and researcher, the former publisher of Longman Caribbean, editor of the landmark anthologies The Sun’s Eye and Facing the Sea, and historian of the Caribbean Artists’ Movement (CAM).

The 2017 Bocas Henry Swanzy Award was presented to bookseller Joan Dayal, proprietor of Paper Based Books, one of Trinidad and Tobago’s and the Caribbean’s leading independent bookshops.

The 2016 Bocas Henry Swanzy Award was presented to publisher and editor Jeremy Poynting, founder of Peepal Tree Press, which over the past thirty years has become the leading publisher of Caribbean poetry and fiction.

The 2015 Bocas Henry Swanzy Award was presented to publisher, editor, and broadcaster Margaret Busby, OBE, co-founder of the publishing house Allison & Busby, in recognition of her decades-long work promoting Caribbean, African, and Black British writers and publishers in the United Kingdom.

The 2014 Bocas Henry Swanzy Award was presented to literary critics Kenneth Ramchand and Gordon Rohlehr, both professors emeriti of the University of the West Indies, in recognition of their role in establishing West Indian literature as an academic discipline, and their groundbreaking critical work on the writings of Caribbean authors.

The 2013 Bocas Henry Swanzy Award was presented to John La Rose (posthumously) and Sarah White of New Beacon Books. Founded in London in 1966, New Beacon is both a pioneering publishing house and a specialist bookshop focusing on writers and writing from the Caribbean. Over the past four decades, New Beacon has published works by writers such as Wilson Harris, Andrew Salkey, Errol Hill, Dennis Scott, Erna Brodber, Mervyn Morris, and numerous others, and the bookshop in Stroud Green, North London is an epicentre of Caribbean literary and intellectual life in the United Kingdom.