An excerpt from the chapbook Letters to K, by Anu Lakhan
Published 2018 by Argotiers Press 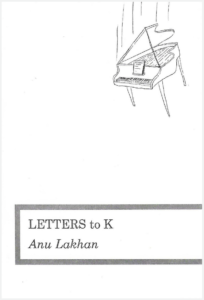 We are in receipt of your letter, dated __ June 2008. Regrettably, we are unable to provide any assistance that would allow you to initiate correspondence with Herr Doktor Kafka.
Since, in your letter to us, it appears the notion of his demise is not unfamiliar to you, perhaps our response has been anticipated and will not prove too great a disappointment.
We hope this will not curtail your enjoyment of his writing or the works of any other writers, living or deceased, who we have the privilege to represent.

Thank you for your timely death. If you were alive I’m quite sure I wouldn’t have the courage to write to you. I’m equally sure I would not have your real address, since publishers have a reputation for withholding such information. In your case, the quest would have been especially problematic since your publishers are somewhat stupid.
To what I considered a polite and necessary letter, asking them if they thought you would be amenable to my communication, I received an idiotic response meant — as far as I can tell — to make sure I continue to buy your books.
So here I am, rather illogically writing to ask if I may write to you in the future. Clearly ridiculous, since I am already writing to you. Also ridiculous since I can expect no evidence of acceptance or refusal. All the same, it seems only good manners. I live in an indelicate time when people take great liberties in addressing strangers. We give no thought as to the desire of the other party to be so afflicted.
I am not yet sure what will help me decide if I may continue to write. But I do want to, so very much.
Thank you for your attention.

I don’t much go in for signs or astrological forecasts or things like that, so I can’t wait for any such guidance on whether or not it would be acceptable to write to you. Yesterday, however, while visiting my parents, I saw a scrap of paper as it wafted down from the hall table. It said, “Franz called. Said he’d call back.” No indication as to who it was for. I am not aware of any friends of my parents of that name, but my ignorance in this matter does not make the existence of the note any less real. Since all I have is a very arbitrary set of personal rules of interpretation (which, as a matter of course, I apply very arbitrarily), then this is all the counsel I can expect: my own, fed on less than nothing.
I have decided to write.
Things — as things are wont to do — are likely to take a different turn (that is to say, I am likely to think otherwise for no clear reason), but while I have it in mind, I thought you might like to know some of the things I am hoping we can discuss. Well, not discuss exactly. You know what I mean.
So, I said to myself, “Self, think about this. You have not chosen to write to someone you know personally. Not someone you can possibly meet. You have not even opted for an easy-going dead person. What are you going to say to him? What do you want to know?”
I’ve made a list; here is a bit of what I want to say:

1. I understand.
2. I don’t understand.
3. You must have been beautiful because everything you said was true.
4. I too am tired and often unwell.
5. The world is squalid.
6. Thank you for being born before me and writing it all so I need not feel so alone now.
7. I’m angry you were not born closer to my time so that I need not feel alone so often.
8. I’m sure you had beautiful hands.
9. Did you play the piano at all?
10. You had such a bad habit of getting engaged. If you’d been with me, I’d have discouraged that kind of behaviour. Maybe, eventually, we could have moved in together, never with any talk of marriage. Sometimes that’s what does a person in — the idea of that step. If you ignore the step entirely and move straight into the gentle, intimate, comforting domesticity, you might be OK.
11. Would I have been willing to live in a very cold place for you?
12. Maybe, in getting to know each other, we would have come to accept that we were so fundamentally lonely that not even the presence of the other could change it. There might have been some comfort in the understanding.
13. I doubt we would have had similar taste in furniture.

I’m very keen to start on the furniture.

(Who am I kidding? I don’t speak German. I thought I’d give the salutation bit a go, but it’s no good. I’ve always been embarrassed by my attempts to communicate in another language when I’m travelling. Best to admit the failure before the test.)
I’ve spent all this time thinking about why I’m writing to you and not considered how these letters might be interpreted. However unlikely my chances of success, now that I have thought of it, I feel I must try to reassure you on a few matters:

1. I am not trying to elevate myself in the literary world.
2. I am not delusional. I mean it when I say I know you are dead. I don’t fancy I’m playing along with some quirk of yours.
3. I do not imagine I am a character in one of your stories.
4. Though in my previous letter I spoke of ways in which a romantic relationship between us might have worked, please know that that was purely theoretical. My intentions are entirely platonic. I think.

As you see, I am fond of lists. My life doesn’t boast of much else that suggests order or structure.
About my writing to you, it is not a complex matter, only this: it makes me feel less alone. I have not read many of your books. I do not think I understand you so well as to imagine a compatibility of minds. It is, as I said, a feeling. I don’t have them often. I mean, of course I often have feelings, I always have feelings, but what I mean is this: this way I feel with regard to you is especially strong and has been so for a very long time. That is the thing that doesn’t happen often. Of course, all my strong feelings don’t have to do with you, so that too is not quite how I meant to say it. If I had any sense or much by the way of pride, I’d tear this up and start over, but I’m starting to run out of paper. Really, I should have known. I know what I’m like, how difficult this would be. I should have gone out and bought a dozen yellow legal pads (which, by the way, is what I write to you on), but it is nearly two in the morning and I do not live in a place where stores stay open all night thinking how they can best serve the needs of insomniac letter writers.
There’s more: I apologise in advance. (I once thought I could safely practice great economy of words with no loss of meaning by simply contracting my vocabulary to the phrase “I’m sorry.” I can hardly think of a situation in which that will not cover most of what I mean.) Yes, I write to you because it makes me feel less alone. I know too, that it is sometimes more important for a person to say a thing than it is for another person to hear it. I am being very forward. I’m sorry. I cannot think what else to do. The thing is, my wanting to write to you — to you, you understand, not just anybody — has become something obsessive. It is a very lucky thing you are not alive, or I might be tempted to move from the relative safety of paper to lurking outside your gate. Does it help at all if I assure you that, even if it had come to that, I would never — never — have had the courage to approach you? To open the gate and ring the doorbell. To stand on the top step and wait while someone told you a strange woman was at the door, and to strain to listen for the interval between the delivery of the message and your nervous but definite refusal to see me. No, it could never have come to that. Still, it is one less thing to keep me up at night, knowing you are safely dead and not likely to feel in any way threatened by me. My cowardice, your not being alive, and the fact that even if you were I can’t see that I’d be able to afford trips to Prague, have conspired to keep us both safe and sane.
Now, why do you make me feel less lonely? (There, it’s been said. It is not simply “alone” but its more cruel sibling “lonely” that I tend to feel, and feel less so with you.) Because I think you would understand that loneliness comes at you regardless of circumstances that suggest the constant, almost oppressive company of others. I think you know that the fundamentally lonely person will be that no matter what comes her way.
I have seen only one picture of you, the one in that rather funereal suit that everyone has seen. It is quite famous, I think. Did you know that? I disagree with what others have said. I do not think you look sickly or severe or morose. Just far. Not like distant or distracted, but as though where you really were was entirely unreachable. Not because you wanted it to be like that, but that that place, that unmappable distance, was simply where you found yourself one day and never managed to make it back to near and now. When someone wants to make a claim for how far they would travel to do something, they often speak of crossing oceans or deserts. They are not truly lonely people, because they imagine that an ease to their ache and longing is at the end of the journey. Lonely people need not trouble themselves with more than the distance between two chairs at a breakfast table.
I have gone on forever and am doubtless no closer (speaking of distances) to explaining myself than if I’d not even tried.
In case I lose the courage to write again, thanks for letting me write these. Perhaps, as has been suggested, I should get a journal, but I don’t think so. If it seems odd to write to a complete stranger who, for very practical reasons, will not respond, how much more sensible is it to write to yourself? Besides, I find something a bit arrogant and self-indulgent in it. Like I was important enough to spend such time on.