Significantly 1966 was not only when New Beacon was founded, but also when the Caribbean Artists Movement (CAM) burst on the scene. Many West Indian postgraduate students were in London continuing their studies after doing their first degrees in the newly formed University of the West Indies. There was an active students’ centre in Earls Court where CAM held its regular monthly meetings. Adjacent was Nkrumah’s Africa Unity House, forming a similar base for African students, but also hosting liberation movements from Southern and Portuguese Africa. And in the USA there was the burgeoning development of the black power movement. It was a very special time, a concentrated cauldron of ideas.

CAM had an intense and vibrant six years of talks, discussions, ‘warishi’ nights. Ideas explored lived on through friendships and shared interests, and also in the everyday experience of later generations of West Indians who were beginning to put down roots in the UK and form a distinct Black British experience.

This did not mean that no publishing went on at all before 1966. Minty Alley by CLR James was first published in 1936 by Secker and Warburg. New Beacon republished it in 1971, part of John La Rose’s vision to make out-of-print classic texts accessible to a new generation of readers. A considerable number of authors, born in the Caribbean, but with writing that reflected their experience both in the Caribbean and in the UK, began to appear, published by established UK publishers. These included George Lamming, VS Naipaul, Andrew Salkey and Sam Selvon. Henry Swanzy, working for the BBC’s Caribbean Voices, provided a space for many Caribbean–based writers to hone their craft.

During the late 1960s and through the 1970s, the publishing of specifically Black British writing or writing addressing the specific Black British experience developed slowly. Bogle L’Ouverture published Getting to Know Ourselves, and Dread Beat and Blood by Linton Kwesi Johnson, Allison & Busby published Buchi Emecheta’s fiction, as well as non-fiction and children’s books. In 1971 New Beacon published the campaigning booklet How the West Indian Child is Made Educationally Subnormal in the British School System for the Caribbean Education and Community Workers Association, one of the early black education movement’s campaigning groups. Other start–up publishers included Blackbird Books (Rudolf Kizerman), Karnak House (Amon Sabaar Sakana) and Karia Press (Buzz Johnson). They all struggled, often operating from cramped quarters in their own homes and providing their own funds. They all had to have an activist approach to the works they were publishing — promoting them at public meetings, readings and through direct sales. They shared this activist orientation with the pioneering New Beacon and Bogle L’Ouverture.

The 1980s saw a qualitative shift in the Black British publishing world. For one thing, government money became available. The British state was faced with the protest movements that had led to the New Cross Massacre Black Peoples Day of Action in 1981 and the uprisings in cities all over the UK that had followed. They needed to absorb or neutralise the protest. Suddenly grants were available, many in London through the Greater London Council and Inner London Education Authority. They helped to provide sustenance and funds for numerous community writing and publishing groups which had started to emerge in 1970s: Akira, the Black Ink Collective, Centerprise, Commonplace Workshop, Out of Many Creative Arts Group, Peckham Publishing Project and so on. Many individual schools around the country were encouraging their pupils to write about their own experiences. The publishing of poetry, stories and autobiographies all flourished, creating a generation whose own Black British experience was being validated as something worth writing about.

In 1982, the First International Book Fair of Radical Black and Third World Books took place. By 1981 New Beacon was working closely, politically and culturally, with Bogle L’Ouverture Publications and Race Today Publications through the Alliance of the Black Parents Movement, the Black Youth Movement and the Race Today Collective. The Alliance, which also had branches in Manchester and Bradford/Leeds, had provided the core organisational structure for the successful Black Peoples Day of Action march. In the autumn of 1981 New Beacon and Bogle, both publishing houses and bookshops, and Race Today Publications, publishing its journal but by now books as well, discussed and acted upon an idea they had for an international book fair. A Call to the Book Fair was sent out in the autumn of 1981 by the two directors, Jessica Huntley and John La Rose:

The aim of the Book Fair is to mark the new phase in the growth of radical ideas and concepts and their expression in literature, politics, music, art and social life. It will be a meeting place for writers, publishers, distributors, booksellers, artists, musicians, film makers and the people who inspire and consume their creative productions.

The first Book Fair was held in Islington, the second in Lambeth and the third in Acton, reflecting the three areas of London where the organisers were based. In 1985 it moved to the Camden Centre, remaining there until the final Book Fair in 1995. The Book Fairs were a great inspiration and helped to nurture many independent black British publishing initiatives at the time. Some fell by the wayside, but a look at the Book Fair brochure published each year with its list of participants and publishers shows the same names coming and growing year after year: Tamarind Press, Verna Wilkins’ pioneering children’s book publisher; Peepal Tree Press started by Jeremy Poynting with work from East Indian Caribbean writers but later widening its net to Caribbean, African and Black British writers. This history is comprehensively documented in the book A Meeting of the Continents (2005).

People and publishers came from all over the world to participate. The Book Fairs and their Festivals provided a platform for discussion around ideas, politics and culture. They built networks and alliances. They carved out a space for independent publishing initiatives. They helped small publishers, who met each other, shared experiences, methods, contacts and skills. They provided an important space to grow and gain confidence. They grew the readership for the wide, varied and distinctive Black British writing which we see today — as well as providing inspiration for those who would go on to become those authors. 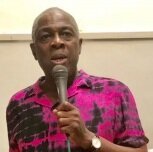 Roxy Harris is a founder Trustee (1991) of the George Padmore Institute and is its current Chair. He was a member of The Black Parents’ Movement, played a major part in the International Bookfair of Radical Black & Third World Books (1982-95), was a member of the New Cross Massacre Action Committee and for many years was a coordinator and teacher at the George Padmore Supplementary School. He has taught in secondary schools, further education colleges, adult education institutes and in universities. He has authored and edited numerous books and other publications. 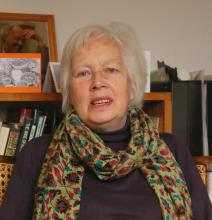 Sarah White started life as a science historian and worked for fifteen years as the Soviet Science consultant to the New Scientist magazine. In 1966 she and her partner, the late Trinidadian poet and activist John La Rose, founded New Beacon Books, the UK’s first black bookshop and publisher, where she worked until 2016. Sarah White was a founder member of the International Book Fair of Radical Black and Third World Books (1982-1995), and the founding Trustee Secretary of the George Padmore Institute (1991), which she still holds. She has been closely involved with the development of the archive collections held at and publications released by the Institute. She has helped to oversee many important projects, such as the five-year Dream to Change the World which ended in 2015 with a very successful exhibition at Islington Museum on John’s life and legacy.